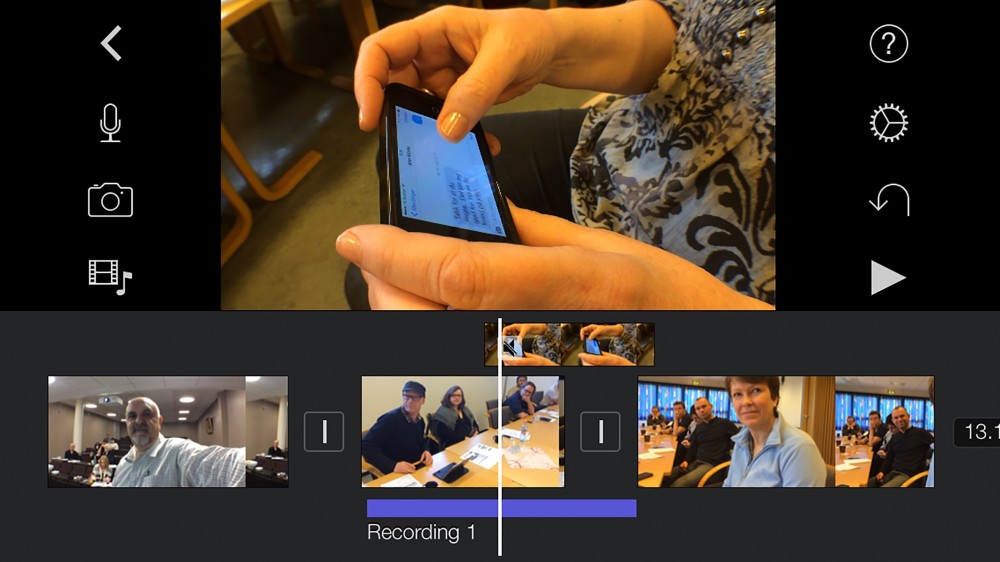 Whether Apple is feeling guilty about binning FCP 7, it’s new lean, mean, iPhone edit machine, is a marvel. Knowing Apple (and none of us really do), iMovie 2.0, is probably only a first step in giving us the full bottle video editing package for the iPhone. And why not, with companies like Intel spending more on mobile chip development than ever, mobile just could be the anytime, anywhere, platform that helps us segue between our life moments. If that’s true, then iMovie is probably a smart glue we carry and use to structure and give gravitas to those moments we want to remember or share.

I have spent the past 4 years teaching communities, students, teachers and professional journalists how to make digital stories using the iPhone. I have predominantly used the Voddio edit App, primarily because it has two video tracks to enable B roll editing, which is crucial to fast and dynamic, news type, video story construction. And because of its audio edit functions.  It even stores the video content in the right spot, on the back of that incredibly utilitarian workhorse, the Camera Roll. With the release of iMovie 2.0, smartphone and tablet video editing, has entered a new era

Some one asked me to do a comparison. Those who use Voddio use it because of two track video editing and it’s audio mix and ducking capabilities. Some organisations also use it because it integrates into its own suite of content management tools. There are a couple of other features like WiFi sharing between devices and computers (which is cool) and the push every track left or right button, which is a professional feature that’s important, but one that Apple hasn’t added.

This post is primarily about on location in field smartphone editing using Apps. Hence, I am going to review iMovie on that basis and those of you who use Voddio, or used to, like me, can make your own comparison, like I’ve done. After all smartphone editing is a very personal thing.

I posted a few days ago that I would be trying iMovie for my next mojo training session. I have just done this and it was a real winner, here’s why.

The first thing you notice with the new iMovie 2.0 is the slick user interface (UI) that allows you to create a project quickly. A number of icons on the home screen hide an array of functions that make this a powerful and intuitive App.

Tap Project and the “+” key and then “Movie” and choose a style and then tap Create Movie, and the following UI will appear.

On the right side:
Help unlocks some help options
Change themes allows the user to choose an edit theme
UNDO button is a must.

On the left side:
Insert media: takes you to your Library where choosing Video, Stills or Audio toggles between three storage areas. Now this is where it becomes interesting and where the power of iMovie becomes evident.

You choose media (in this case Video) by tapping a clip, then you simply drag the Yellow bar at each end of the clip in to the desired in and out point. You can then play the chosen portion of clip before deciding to import it. A dialogue box appears when you tap your clip offering some powerful options that make this App a very news friendly tool.

1. Drops the selected portion of the clip into the time line
2. Plays the selected clip
3. Detaches audio and places this on an audio track. This effectively gives you another vision track because this audio, that’s detached from a vision clip, can have another two vision clips layered above it
4. Creates a second B roll vision track and locates your overlay with its audio muted (this is the key new feature that enable fast and professional editing)
5. Picture in picture – place the selected vision (video or still) in another piece of vision
6. Split screen – creates a split screen of the vision.

It all works very well!

Back to Figure 1
Record Video or Photo – enables the user to record video or photos directly into your timeline, almost live over existing VO (so you know exactly how long these need to be over, for example existing VO) and this is placed exactly where your cursor is parked. These will be stored in Camera Roll.

Record Audio – is an excellent feature that provides a countdown and a view of your new voice over running underneath the picture, in the timeline, as you record it. This gives you an idea of required length and whether you need extra pictures or a shorter VO. When recorded you can review the VO, discard it, or keep it.

The audio area is where we run into slightly slow mode when mixing or ducking is needed. If you need more control over your VOs and to reference their raw form, you can use this workaround.

Tip: Record VO as a Video then select whole or a portion of it and use the detach tool (wave like icon) to insert the audio into your timeline and you always have the original as a file.

Key frame audio ducking is not possible on the iMovie 2.0 except for iMovies own version which requires you to, for example, split your music track (or detach audio from sync) at the point where levels need to be changed, before lowering the section that needs to be ducked and raising the levels on the incoming section. You can also fade each of the in and out points. This is done by double tapping the audio track before accessing the dotted more features on the bottom right of the timeline. Tapping here will reveal a number of options, choose Split and go from there. This worked just fine enabling me to duck sections of music. If that’s not enough, here is another workaround.

Tip: on iMovie cut and mix your story but leave music out before doing either of the following (a) on iMovie 11 for the Mac you can split audio tracks and duck by fading each segment in and out before independently setting its levels, so export the project to iMovie 11 for Mac and audio duck there, or (b) render the project to a video without music before exporting to Voddio, for key frame ducking. Import and insert the music and duck there, or  (c) simply insert music in iMovie iOS timeline and turn the Green (Background) audio track to Blue (Foreground). This enables music to be cut, shifted on the timeline, and mixed. The only audio functions iMovie for iOS doesn’t have are key frame ducking and VU meters.

In the Timeline
Figure 3 below shows a very dynamic representation of the elements that come together to make the video. You see elements clearly – video and audio and a music track.

Video Tracks – there are two possible video tracks. I believe this feature alone has taken iMovie into the prosumer level. Having two video tracks enables very fast story editing where the user can concentrate on getting the story right on Video track one, before going back along the timeline to insert the B-roll, to cover edits and highlight story points, on Video track 2. This is exactly how the experts do it. Why? Because it’s the fastest way of constructing story and allows you to play with and change story structure without having to undo color or B roll, which is inserted on Video track 2, once story is structured.

Audio Tracks and embedded audio in video tracks – there are effectively six audio tracks. We often made TV with just two. Tapping the vision or audio tracks reveals a bottom of screen slider for altering audio levels.

Tip: iMovie for iPad and Laptop have many advanced audio features which include the ability to view dynamically updating audio waveforms as volume adjustments are made, perform split edits, or fine-tune transition points. iMovie 2.0 allows iPhone users to quickly rough up an edit, then wirelessly transfer the project to an iPad via AirDrop, where it can be completed using more advanced tools.

Transitions – the default transition between shots is a dissolve but this can be changed by highlighting it to reveal another set of transition options. Here you can choose “none” or some more fancy offerings, like wipes.

Titling Tool – this offers a number of titling options, but without a duration timer, at least not one I could find on this first look. Choosing a theme will unlock various titling options. Once you choose the title style, then simply Tap the titling box and write.

Tip: The work around for duration is to split the shot at the duration point. This is also how I would do subtitles.

Splitting shots – this is done by holding the white Play Head at the point you wish to break the shot, press and pull down, like a swipe, and the shot splits. Now you can insert another shot between this and all tracks will move right in sync. Or you can highlight a clip on the right, the excess amount and bin it.

Once you are happy with you video and your audio has had a mix, you can play the completed story in full screen to check your edits, and when happy you can save it to Camera Roll, or send it to a number of locations via a myriad of methods, including AIR DROP, which is a cool way of transferring your project to iPad to access the additional audio and other advanced tools.

Tip: Camera Roll is the iPhone’s intersect hub. Use it to send your videos to FTP sites and other systems like Xstream, which are used by news organisations.

You access these functions by tapping the upload button on the home screen to reveal the following screen, Figure 5.

There are a number of other features to play with including slow-mo. The best way to learn Apple stuff is to play. Learn to use the above and you’ll be making dynamic videos in literally minutes.

I think Apple has created a terrific App for the mobile journalist, which might lack one or two audio enhancement tools. But with its own ducking workaround for the citizen, student or journalists c can create a dynamic and professional edit, with an audio mix and titles, that can be uploaded from location. In many respects this App is so powerful that it is definitely a contender for the bad boy of smartphone editing.

The proof is in the pudding, so what are you waiting for, Go Mojo.