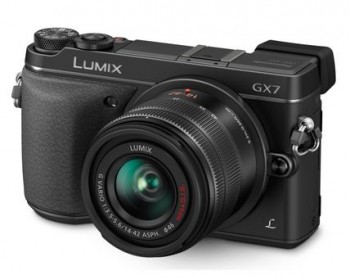 Until recently I wouldn’t have thought of buying a compact system camera (CSC). Being a Nikon stills devotee and a Sony video camera user, Panasonic wouldn’t have been my first choice. That’s because the other two brands are so reliable and because I’ve got so much invested in gear, especially lenses.

Some will argue that stepping into the CMC field is a blind jump into an unmarked pit of bridging quick sand in a digital format mine field. Or maybe it’s all about buying a video and stills hamburger, with the lot? Thats the  GX7 in a nutshell, well, almost.

Replacing the  Panasonic Lumix DMC – GX1, the brand new 16 megapixel GX7 might just be the current leader of the CMC pack. At 123x71x55mm, the GX7 is actually a little larger than the NEX 6, but slimmer than its bigger bother the Panasonic Lumix DMC-GH3  and more expensive than the camera it replaces the GX1. Its got the bells and whistles that make this new pontoon between the DSLR and digital video worlds, a viable alternative. Why? Lets check it out.

Despite Panasonic producing a range of image-stabilized lenses, the GX7s in-body stabilization enables the use of either Olympus’s M 4/3 lenses, or legacy lenses via adapters. Combined the GX7’s ‘focus peaking’ manual focus aid, it promises to make the GX7 one of the more capable options when it comes to shooting with adapted lenses.

The GX7 has a lot to offer keen photographers, including a maximum shutter speed of 1/8000 sec and a flash sync speed of 1/320 sec. The camera is also in unexpectedly exclusive company when it comes to offering a DSLR-like twin-dial control system. There are several mirrorless cameras with two control dials, but remarkably few that make it easy to simply set one to control aperture or shutter speed, and the other to control exposure compensation, which makes the semi-auto aperture and shutter priority modes enjoyable to shoot in.

The most obvious difference between this camera and the GX1 is its electronic viewfinder (EVF). The GX7 includes optical stabilisation in the body, so it works with any lens. The usual Panasonic LCD touchscreen is 75 mm and sharper (2.3 million dots) and tilts up and down enabling the user to run it in hand held video mode with ease. There are dual command dials for direct access to exposure settings, which are easier to use in a hurry than the set up on the GX1.

The magnesium alloy body looks and feels rugged and the camera looks beautiful, like a sculptured magnesium weapon. The chunky hand grip feels like it won’t slip from the hand, hanging securely from three fingers like a trapeze artist. In contrast to the GH3, which is dust and splash-pro, Panasonic are not indicating this camera is weatherproof.  The lack of weather-sealing means that the GX7 gets chunky, clicky controls and buttons. There’s also four Function buttons on the rear and a further five soft keys on the touch-screen. All nine are completely customisable, even down to having different functions for recording and playback.

The first thing you notice is the controls are stylish and effectively laid out.  The second is that the screen smudges easily. The touchscreen makes it easy to adjust the autofocus point like on some smartphones. The only issue we found was the sensitivity of the LCD screen control which sometimes would switch to EVF when a hand blocked the EVF.

The EVFs almost 2.8-million-dot resolution is high. It’s like another world in there and many DSLRs aren’t as good. The tilting design is a real bonus especially when bending slightly to shoot video around waist level.

I found the GX7 less cluttered around the lens and much easier to use in the video mode than the much acclaimed GH3. I like the LCD screen being in the middle not to the side  when extended like the GH3s. It means I am looking more at my subject area. In close quarter journalism that’s important.

Sensor based image stabilisation a first for Panasonic.

My feeling is that stills cameras with video are just that, stills cameras with video. A video camera requires a bit of length to it so it can be shouldered or cradled at waist height with one or two two hands. A video camera also requires a power zoom. Not so you can zoom in and out, like a yo yo, but so you can whip in for that quick grab and quickly  whip out again. Then there is the occasional gentle zoom through an orchid, in a gardening story. It’s just the way video works.

I have experienced some issues with  a lack of depth of field. Said to be one of the pluses of working with stills type of cameras that shoot video, it can also be a  bother. This is a common problem news photographers experience when they are asked to use their DSLRs to record news type video. If the video subject is still, or moving slowly on the same  plane of reference, hybrid cameras do well, but as soon as vertical (depth from camera) frame deepens or shallows, operators  can and do experience depth of field issues and focus problems. Having said this I am going to use this camera for a documentary and learn about its foibles, because its pictures are so good. The smaller size makes the GX7 very user friendly in remote  environments.

This popular micro four-thirds (MFT) format means that we have a choice of a wide variety of compact lenses.The in camera stabilisation means that lenses like Olympus, which don’t have lens stabilisation, can be used. If lens designed stabilisation is available the camera will give this priority. Very cool.

The 14 – 42 zoom supplied as part of the kit is a little bulkier than the motorised zoom on the  GX1. I got mine for $50 and it feels like it. It is rough on the zoom and feels like it came out of a cornflakes pack. We like the pancake power zoom which can still be  purchased in white, but I also found them in black at Amazon.

However if you want a real lens d what I did and purchase the 12-35mm 2.8.  Effectively 24-70mm zoom this lens is a must for any serious journalism work. It also has excellent control over depth of field to enable those timeless background to foreground focus shifts. The lens feels sturdy like its a real piece of glass. Add to this the 35-100mm 2.8 and you have a professional journalism kit, for 2/3 the price of a Nikon or Canon equivalent.

The Wi-Fi talks with iOS and Android app. These have remote capabilities with live preview terrific for monitoring video records, in some circumstances, with and ability to control focus and exposure settings while recording. No more camera shake. The WiFi lets you send photos and MP4 video to a nominated target site.

The GX7 snaps some of the sharpest images in the class when paired with a prime lens. Colours on default settings are life like without being over saturated. Automatic exposures settings are useful, with only marginal tendencies to under expose. The GX7 produces RAW and JPEG files. Noise was not a problem at lower ISO settings, with ISO 1600  being the first setting where we experienced the slightest level of noise. So how often are you shooting beyond that?

Video quality in either AVCHD and MP4 is good, but the lower MBPS recorded by this camera, compared to the GH3, is noticeable. The auto focus is good but… We were very pleased with the GX7’s video quality. As you’d expect from a camera that records 60p video, motion is smooth. The camera captures the amount of detail that one would expect at Full HD resolution, though moiré will appear at times.

The GX7 has an inbuilt stereo microphone but no inputs for an external microphone or head phone jack. Sound quality is good, and the adjustable audio levels allow you to fine-tune things (though it’s a shame there’s no support for an external mic).  So how serious is the GX7 when it comes to video? The GH3 comes equipped with both.

The GX7 uses the DMW-BLG10 lithium-ion battery – used by a number of other Lumix mirrorless cameras – and it contains 7.4 Wh of energy. With the 14-42mm kit lens, battery life is estimated at 350 shots per charge. The included battery charger takes just over three hours to fully charge the BLG10.

The use value of any tool is dependent on two factors: application and skill level. This camera will provide the quality of video and stills to enable a professional production. You will need to ask yourself what will I use its content for? If its just for snaps, then you probably don’t need to spend this much, get the TZ40 or the not yet shipped amazing TZ60. If you are a semi pro enthusiast photographer, then the GX7 could be for you. If you are interested in video then you need to consider this camera; but you also need to ask yourself why aren’t I purchasing a video camera? This camera shoots good video, but it will need to be converted from mp4 or AVHD. If you are interested in DSLR video then do you need an audio input for 3rd party microphones? The GX7 doesnt gave one (mistake), but the GH3 does (perfect).

I love the feel of this camera and the pop out screen makes shooting video from the waist a breeze. The articulated view finder does the same for the head bend shot. At 28Mbps it doesn’t record as much video information as the GH3 (72Mbps file sizes). Its maximum shutter speed of 1/8000th and flash at 1/320th means this camera is pitched at the semi pro to pro market. Of the two colour choices: I prefer black to the two-tone retro looking black and silver. In Australia the  camera body will sell for $1249 AUD. A silver bundle with the 14-42mm F3.5-5.6 MkII lens sells for $1349AUD; and $1499AUD with the 20mm F1.7 MkII lens; and the black body with Leica 25mm F1.4 lens will set you back $1949AUD.

It’s competitors are the Olympus E-P5, which costs $170AUD more, or $600AUD more with the optional VF-4 viewfinder. The Fujifilm X-E1 costs the same as the GX7. The Sony Nex 7 at $1299AUD provides excellent value also (review coming).

All in all, the GX7 is a great package that has many strengths, including a silent motor that’s almost whisper quiet. It’s video mode, even though Mbps herbs are down, delivers sharp focused images, which help this camera stand out against much of the competition. The interesting thing about this camera is that when you pick it up with a weighty 12-35mm piece of glass, you feel you are holding something much more expensive. Frankly, I just didn’t want to put it down. So I bought one.